“The medical drama follows the personal and professional lives of the doctors at Seattle's Grey Sloan Memorial Hospital.”

Grey's Anatomy is an American television drama that has aired on ABC since March 27, 2005, making it the longest-running American medical drama. It is broadcast on ABC on Thursdays, 8/7c. It will return for a two-hour Season 17 premiere on November 12, 2020 and will be back after a winter on March 3, 2021.

Set in the fictional Grey Sloan Memorial Hospital in Seattle, Grey's Anatomy follows the personal and professional lives of several surgeons, as they progressed from surgical interns to seasoned doctors. Although featuring several main characters, Dr. Meredith grey serves as the show's central and titular character, as well as the primary narrator.

This article covers media that has not yet been released. Therefore, there may be content missing. The article will be updated when the media is released onto ABC.

The show's premise originated with Shonda Rhimes, who serves as an executive producer, along with several others. The series was created to be racially diverse, utilizing a color-blind casting technique. While the show is set in Seattle, it is primarily filmed in Los Angeles, California.

The title is a play on the name Gray's Anatomy, an English-language human anatomy textbook originally written by Henry Gray. 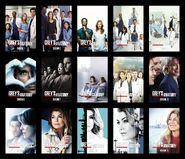