Body of Proof is an American medical drama television series that ran on ABC from March 29, 2011, to May 28, 2013, and starred Dana Delany as medical examiner Dr. Megan Hunt.

The series was created by Chris Murphey and produced by ABC Studios. It was canceled by ABC after three seasons.

The series stars Dana Delany as Dr. Megan Hunt, a medical examiner. The show focuses on Hunt's efforts to balance the demands of her professional life, dealing with solving cases and analyzing bodies, with her personal life, trying to reconnect with her estranged daughter.

Hunt was a top-flight neurosurgeon, until she had a life-changing automobile accident and then accidentally killed a patient on the operating table. This resulted in her resignation, and retirement from the profession altogether. 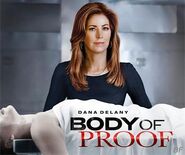