“A fun yet bold look at one man's determination to establish a sense of cultural identity for his family.”

The series has spawned two spin-off series: Mixed-ish and 'Grown-ish', though the latter is produced by Freeform rather than ABC.

Black-ish airs on Wednesday at 9:30|8:30c. New episodes are available for streaming the next day.

This family sitcom revolves around an African-American family who are living the American dream. Andre 'Dre' Johnson has it all: a great job, a beautiful wife, , five kids, and a colonial home in the suburbs. However, there is a flip-side to success as Andre fears that his success has brought too much assimilation for this black family.

While Andre and his wife, Rainbow, was to provide their children with the best, they realize there is more to life than what money can buy, and that their childhood is very different than theirs. With the help of his father, Dre begins to try to create a sense of ethnic identity for the members of his family that will allow them to honor their background while preparing them to embrace the future.

This article covers media that has not yet been released. Therefore, there may be content missing. The article will be updated when the media is released onto ABC.

Black-ish first appeared on the development slate at ABC in October 2013, when it was reported that the project, which would star Anthony Anderson, had received a script commitment. On January 16, 2014, ABC greenlit the pilot episode. Two weeks later, Larry Wilmore joined the show as showrunner. In mid-February, Laurence Fishburne was cast as the father of Anderson's character, and Tracee Ellis Ross signed on as the female lead. On May 8, 2014, ABC picked up the pilot to the series for the 2014–15 television season. A few days later, Anderson announced that Larry Wilmore would be stepping down as showrunner early in the show's run due to his forthcoming late night show, The Nightly Show with Larry Wilmore.

The 23rd episode of the third season of Black-ish, "Liberal Arts", functioned as a backdoor pilot for a proposed spin-off starring Yara Shahidi as her character, Zoey Johnson, goes to college away from the family.

While ABC passed on the pilot in May 2017, its cable sister channel Freeform picked it up, and the series now titled Grown-ish premiered on January 3, 2018. 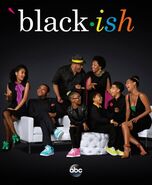