“Paul Hennessy had grown accustomed to his wife Cate taking care of their son and two daughters. When Cate decides to return to work, Paul takes a job as a local columnist...”

The Hennessy clan -- mother Cate, daughters Bridget and Kerry, and son Rory -- look to one another for guidance and support after the death of Paul, the family patriarch. Cate's parents lend a hand.

The first season focused on Paul being left in charge of the children after Cate takes a full-time job as a nurse, with comedic emphasis on his often strict rules concerning his daughters and dating. 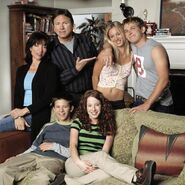